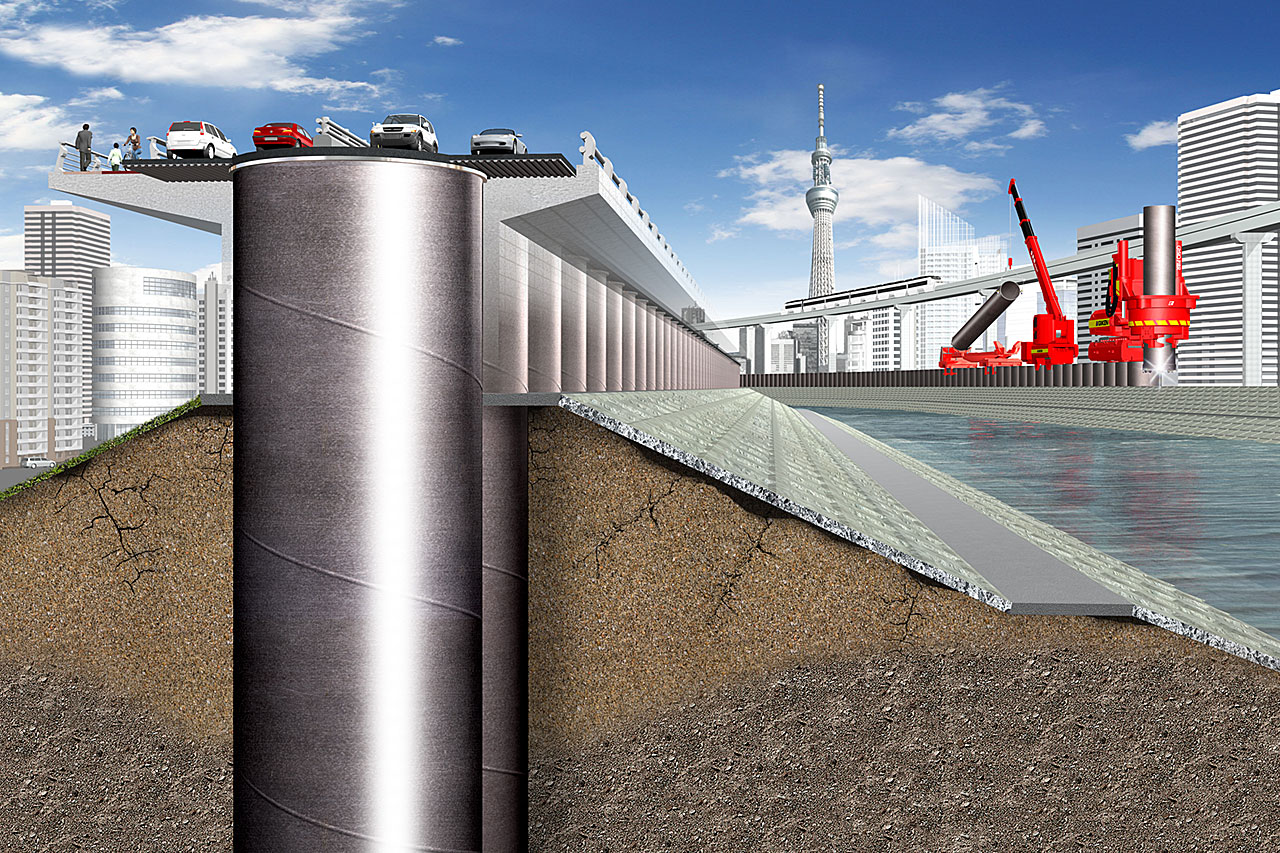 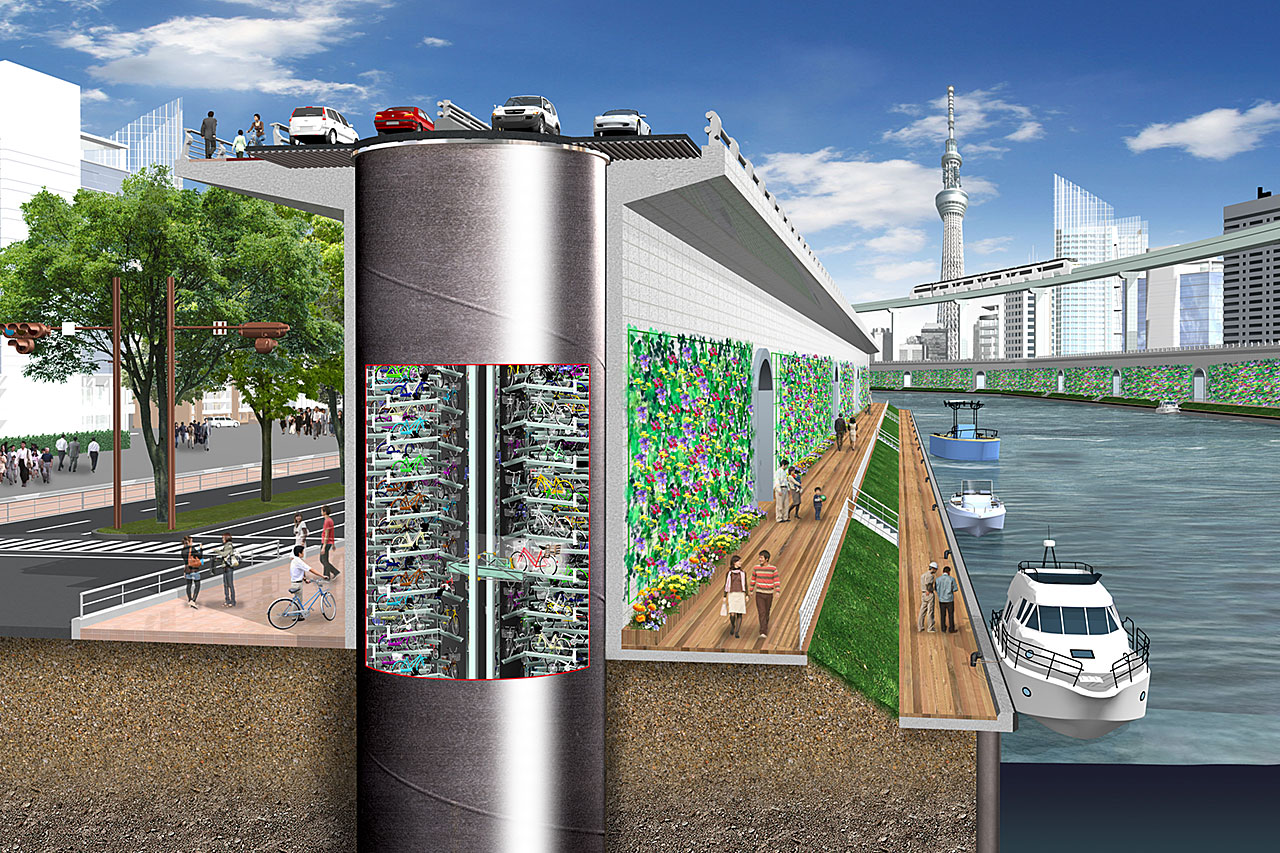 The construction of a super levee for flood control around a large city incurs huge costs and considerable time due to the fact that a wide area of the city must be redeveloped. The Super Implant Levee will not be damaged by liquefaction or overflow because a continuous wall consisting of high-rigidity large-diameter members is installed in an existing levee. Since the continuous wall can be installed in a very space-limited location, the land facing a river and that behind the levee can be used effectively. The levee maintains its function even if subjected to the effects of a natural disaster, and accordingly can be also used for infrastructure such as transport networks and emergency evacuation facilities. 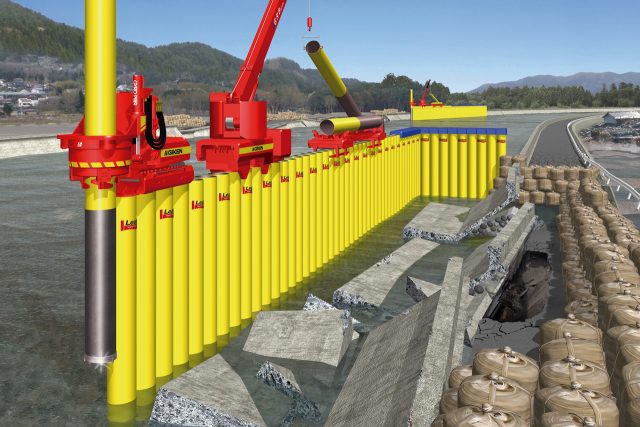 The allowable structural member of the Implant Structure that is inserted into the ground is easily installed and removed, so that the installation location and duration can be changed easily, making it a function-oriented functional structure. When a levee is damaged, it can be temporarily repaired by immediately installing a functional replacement. After the levee has been permanently repaired, the temporary levee is removed and relocated to another site. As such, a lease levee can provide its levee function for a required length of time and when it is required. 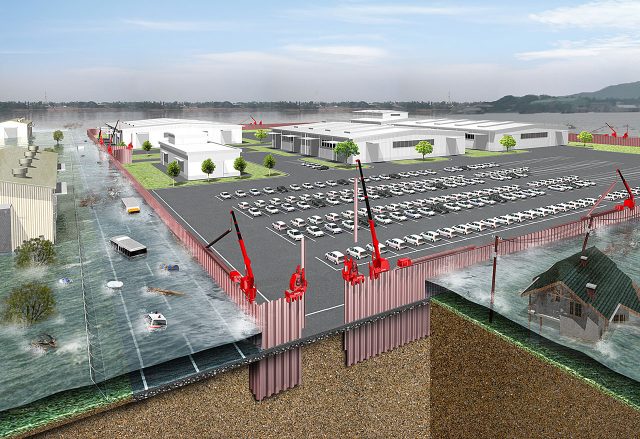 Surrounding facilities with a cut-off wall to prevent them from becoming submerged.

Flooding disasters occur in many parts of the world, and are on the increase due to a rise in the sea level as a result of global warming, unprecedented torrential rainfall as a result of climate change, or ground subsidence caused by excessive pumping of underground water. The implant cut-off wall, which requires only the insertion of an allowable structural member into the ground, can immediately prevent facilities from becoming submerged. Companies supporting the development of the social economy are socially responsible to ensure the continuity of their businesses, and need to have a corporate defense to guard against the occurrence of disasters through their own efforts.

"Implant Levee" as a Measure Against Collapse 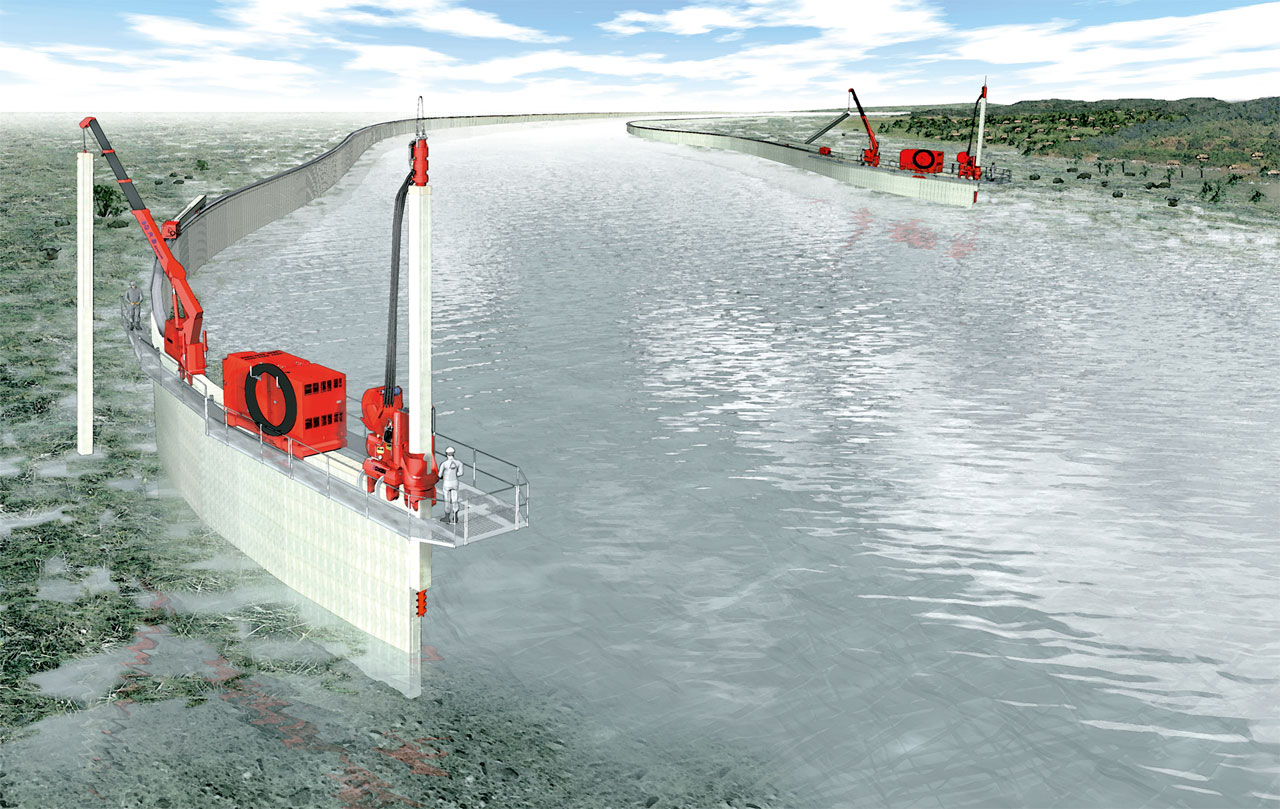 Among natural disasters, there was a dramatic increase in the incidence of flooding from the latter half of the 1980s. It is an issue being faced all around the world, with the scale of damage increasing year after year. In the Arakawa that flows through the urban areas of Tokyo, the population density in the basin area is the highest in all of Japan, with public institutions also being concentrated there. In simulations carried out by the Ministry of Land, Infrastructure and Transport, if the Arakawa levee was to collapse, the city would become completely submerged, the public transportation network would be destroyed, with total damage estimated to be more than 24 trillion yen (1999). Homes and property would be lost, as well as many lives.

When using the GRB system, which enables direct construction of Implant Structures without requiring temporary construction work, if such a collapse of the levee occurred, work would get underway quickly, without choosing the location, to build a strong Implant Levee and shut off the collapsed area at once.

Even in Europe, damage from flooding is serious. It goes without saying that lives are important, but also the heritage, such as the historical buildings of the city and cultural facilities, is a priceless asset that is hard for humans to lose.

Also, the main rivers of Asia such as the Mekong River and Yangtze River often overflow, causing major flooding. One of the causes is said to be deforestation, so the damage cannot be overlooked. With the GRB system, even if a river was to overflow and water could not be drawn from that river for a long time, a new river levee could be built in preparation for the next flood.

"Implant Raking Pile Revetment", with Reinforcing of the Function of Rivers and Waterways 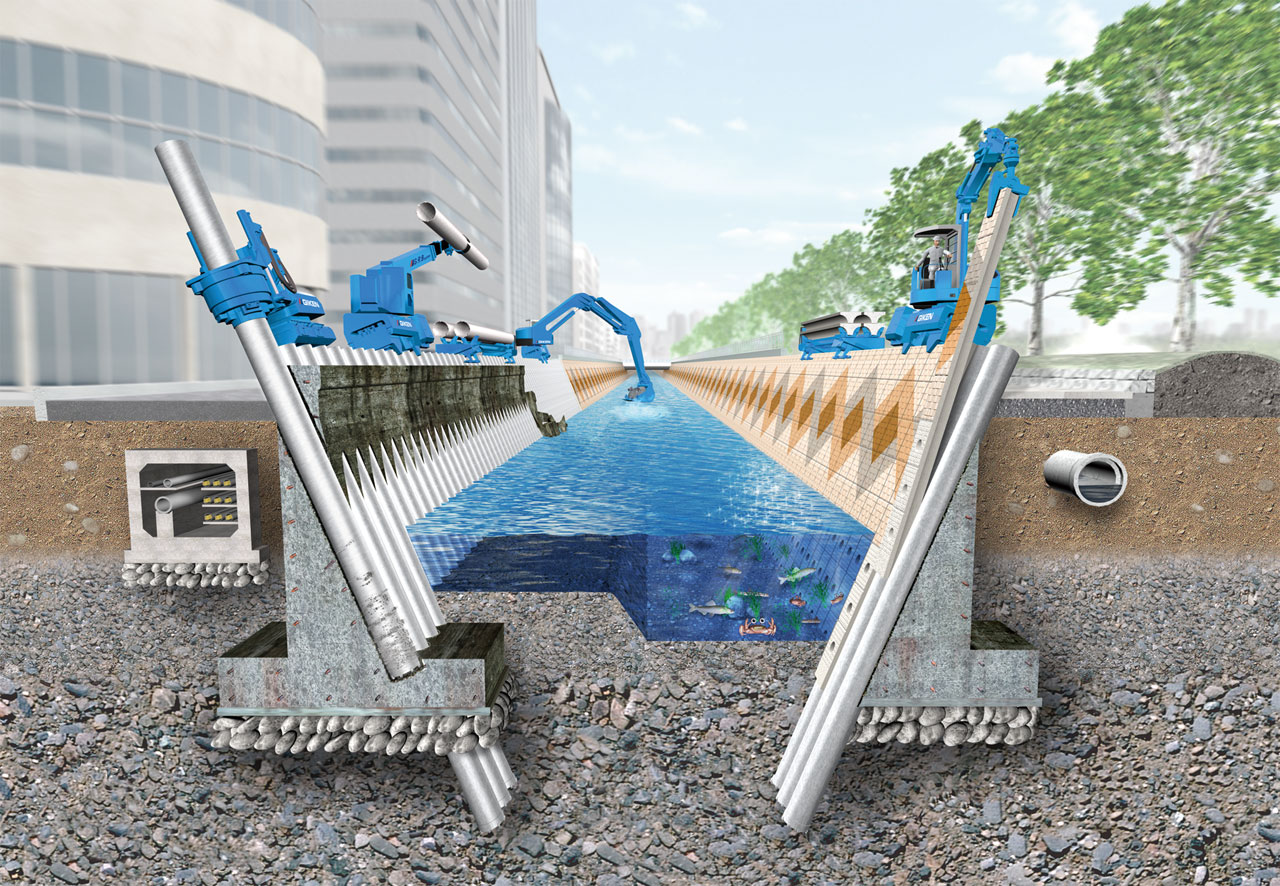 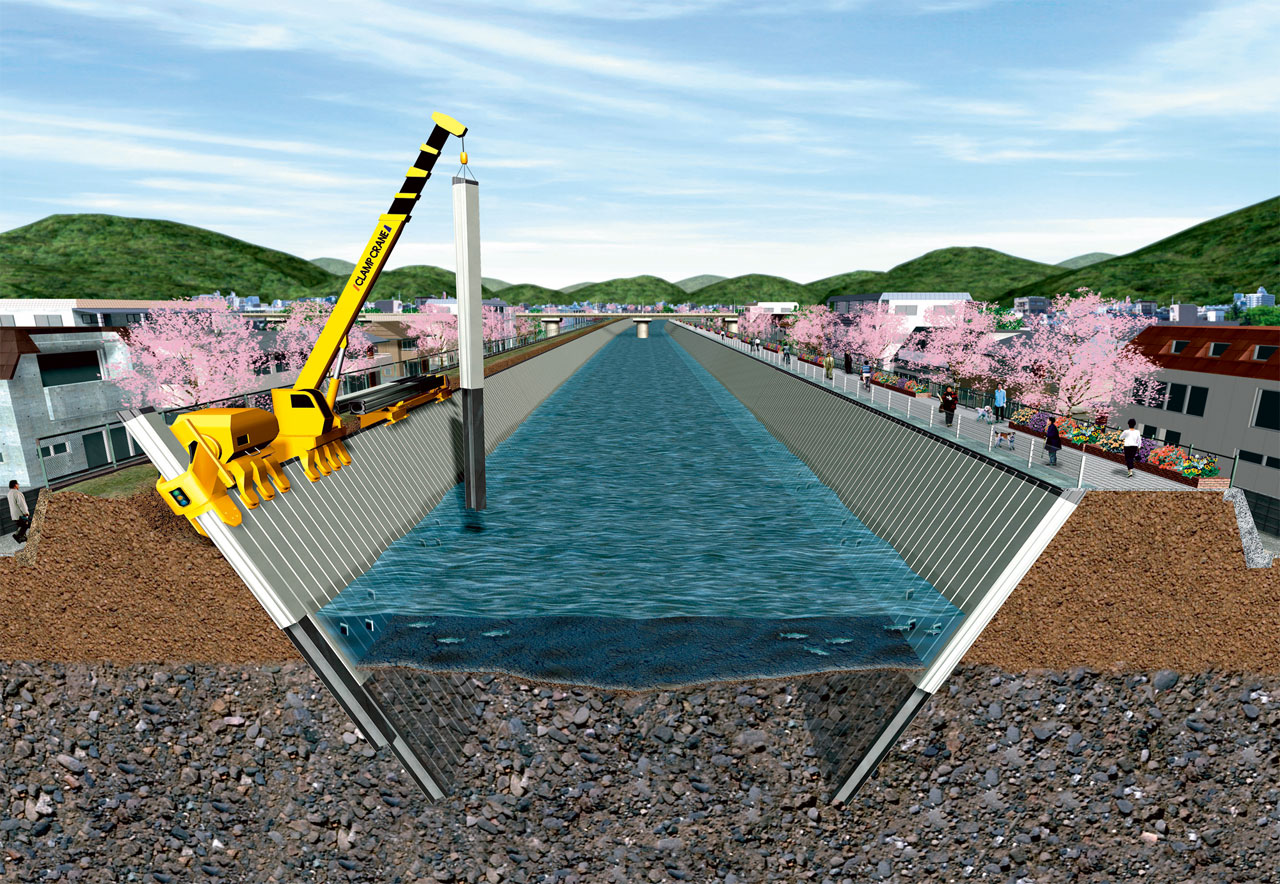 Seawall construction for rivers and waterways is important business for flood control, water utilization, etc. It is ideal to have an inclined revetment, which has less ground pressure from behind, compared to upright revetment, and has the benefits of keeping the flow rate of the river steady, and making vegetation revetment easier. However, it is difficult to build an inclined surface directly with pile material using conventional methods, with many issues such as block (stone) retaining walls requiring a lot of complicated temporary work, being dependent on the weather and surrounding environment, delays in the construction period, and secondary disasters. The solution for that is Implant Raking Pile Revetment, in which structural members with a vegetation function are pressed in diagonally.