Now available worldwide, GIKEN have high expectations for promotion of the Press-in methods

An introductory book on Press-in technology covering the Press-in principle and the SILENT PILER™ entitled “New Horizons in Piling: Development and Application of Press-in Piling” has been published. The book is now available at bookstores worldwide and e-commerce websites.

The book was co-authored by Akio Kitamura, inventor of the SILENT PILER and founder of GIKEN LTD. (Head Office: Kochi, Japan), and three others. The book provides information from the fundamental to the practical use of press-in technology. It is expected to be used as a source of reference for readers who are unfamiliar with press-in piling. GIKEN Group congratulates the publication of this book. We hope the book will increase awareness of press-in technologies, particularly in English-speaking countries.

■Background of publication
Previously, information on Press-in technology was only available through GIKEN’s website, research papers and thesis. This made it challenging for newcomers to understand the technology. Former President of the International Press-in Association (IPA), Osamu Kusakabe, proposed to write a book for new learners. Since 2016, the four authors, Emeritus Professor of Cambridge University, Malcolm D. Bolton, Akio Kitamura, and GIKEN Technical Advisor Masaaki Terashi, have endeavored to complete the book. 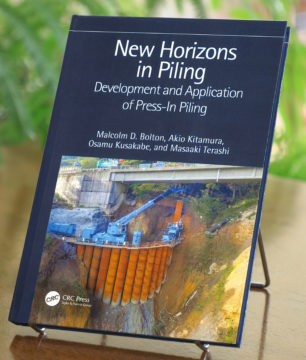 In each chapter, actual construction photographs and CGs are often used, aiding our readers to have a clearer understanding.

※2 In general, a press-in piling machine refers to a machine which installs prefabricated piles into the ground by hydraulic jacks. Among various press-in piling machines, the SILENT PILER is a lightweight and compact piling machine because it grips the already installed piles and utilizes their pullout resistance as a source of reaction force for pile jacking without relying on heavy counterweights. The ability of the SILENT PILER to “self-walk” on pre-installed piles eliminates the need for a temporary works and allows for construction efficiencies.

■Future Perspective
The International Press-in Association (IPA) is currently proceeding with the multilingualization of the Press-in retaining structures: a handbook. Different from the introductory book, this handbook was first published for practitioners and researchers as the first technical document in English based on Design and Construction Guidelines for Press-in Piling in Japanese. Last year IPA published the Chinese version. The plan to publish French, Portuguese, Thai, Vietnamese, and Russian versions is underway. Once completed, the handbook will be available in eight languages, including Japanese. GIKEN hopes that the publishment of these books will further enhance the understanding of the press-in technologies worldwide.

Malcolm D. Bolton
After graduating from Cambridge University’s Faculty of Engineering, he received a master’s degree in structural engineering at Manchester University and a doctorate in soil mechanics at Cambridge University. In 1994, he commenced a collaboration research with GIKEN. He has also served as the first President for IPA for nine years from 2007.

Akio Kitamura
In 1967, he established Kochi Giken Consultant, the predecessor of the GIKEN Group today. In 1975, he invented the press-in piling machine, SILENT PILER. The invention of SILENT PILER was a realization of the Press-in Principle and elimination of construction pollution during piling works. In 2018, he was the first Japanese person to win the Ben C. Garwick Award. As of November 2020 he is the Executive Chairman of GIKEN LTD.

Osamu Kusakabe
After graduating from the Tokyo’s University of Agriculture and Technology, he obtained a Master of Engineering from the Tokyo Institute of Technology, Master of Philosophy and a Doctor of Philosophy both from Cambridge University. In 1996, he became a professor at the Tokyo Institute of Technology. He was the second President of IPA from 2016 to 2019 and has been the Executive Director since 2020.

Masaaki Terashi
He started his career as a researcher at the Port and Harbor Research Institute of the Ministry of Transport and moved to Nikkei Sekkei Ltd. He also served as a visiting professor at the Tokyo Institute of Technology for six years, from 1999. As a ground engineering consultant, he provides advice to a wide range of infrastructure projects in Japan and overseas. In 2010 he became a technical adviser of GIKEN LTD. He also has a wealth of experience in publishing technical books overseas.

■Details of the book

■Profile of GIKEN Group
GIKEN developed the SILENT PILER, the world’s first reaction-based hydraulic pile jacking machine, installing piles with no noise and vibration. GIKEN Group now actively promotes the Press-in Technology worldwide and contributes to the construction industry by proposing and implementing innovative solutions. The innovative technology of press-in provides a unique solution and the adoption of this technology has grown to more than 40 nations and regions.