We are pleased to announce that as of the 25th of November, Shinnosuke Moribe has been appointed President of Giken with Akio Kitamura becoming the Executive Chairman. This is the first change of presidency since the company’s founding’s in 1967.

■ Akio Kitamura and Giken’s History
Founder of Press-in & Innovation to piling industry
In 1967, at the age of 26, Mr. Kitamura founded the Giken Group which was then known as the Kochi Giken Engineering Consultancy Company, endeavoring to overcome the issue of construction pollution caused by piling works. By 1975 he had developed the SILENT PILER™, the world’s first reaction-based hydraulic pile jacking machine, installing piles with no noise and vibration. This innovation brought forth a shift to construction as we knew it and thus created the Press-in industry.

Business Evolution
As the business has evolved the management strategy of “Changing worldwide construction through Implant Construction Methodology” has been implemented. The Implant Method is a method of construction, creating tenacious structures by installing high rigidity and high-quality piling materials using Press-in. These foundations structures are built to withstand natural disasters such as earthquakes, tsunamis and floods. In 2011, Japan was struck by a significant earthquake which caused mass destruction and subsequent tsunamis to the region. As a result the Implant Method was implemented across Japan, used to reinforce the existing footing structures, protecting surrounding communities and infrastructure from future natural disaster events. This accelerated economic growth for GIKEN with increased uptake of the Implant Method across Japan. In 2017 GIKEN Ltd celebrated its 50th anniversary, which was made all the more special by being listed on the Tokyo Stock Exchange, the first manufacturing company do to so in the Kochi Prefecture.

Transition to a global engineering company
In recent years, GIKEN has focused on overseas expansion with Press-in being adopted in more than 40 countries. Our methodologies are continually being implemented in large scale projects with recent achievements including the Quay wall renovation in the World Heritage-listed canal district of Amsterdam, the Netherlands. Our business model has evolved from the supply of machinery with engineering and construction completed by third party companies, to a total- package solution, which incorporates design, materials procurement, maintenance and management. Our company of humble beginnings has grown into an innovative and pioneering leader in the construction industry and its success is owed to Mr Kitamura and his dedication to the company.

■Promoting construction method and the contribution of Shinnosuke Moribe
The difficult feat of promoting Press-in method
As is with new technologies, we faced difficulties promoting the GIKEN methodologies to the Global market. Our approach was to focus on the key stakeholders, such as the project owner, to increase awareness and understanding of GIKEN. Prior to Mr Moribe joining GIKEN, our primary clients were consultants and general contractors. It was clear that if we were to expand as a company, our networks needed to include a range of stakeholders allowing for domestic and international growth.

Active approach to accelerate the expansion of Press-in proposal
Ever since I established this company at age 26, I have devoted myself to its growth and development. In 50 to 100 years from now, GIKEN Group will become a world leader in the construction sector. Now that we have made significant inroads as a global engineering company, we are at the beginning of a new era. It is knowing this, that I have decided to appoint Mr. Moribe, my most highly trusted employee, to succeed in the President’s position.
As an Executive Chairman, I will focus my efforts on business development. My mind is full of ideas and new concepts, new machines, new methods and I desire for them to become a reality. Developing technological capabilities as a manufacturer is a perennial theme. Embracing IoT we will continue to lead the industry, introducing and developing cutting-edge technologies.

■ Comment from Shinnosuke Moribe
GIKEN Group’s philosophy of “Changing worldwide construction through Implant Construction Methodology” will be at the forefront of our objectives moving forward. We will be taking concrete actions to reflect the company and its ethos that Executive Chairman Kitamura had spent years building. We will continue to build new products and methodologies while continuing to meet demand, not only domestically but internationally.

Each employee will be required to rise to the task of growing this company, and I will do my utmost to hold up these values and to grow, innovate and transform global construction.

■ Profile of Akio Kitamura
Born in Konan City, Kochi Prefecture. After graduating high school, he started his career at a construction equipment rental company in Kochi City. While extracting a H-section pile from the ground, using a pin through a hole drilled in the pile, he saw the drilled hole tear upward due to the large resistance force applied to the pile from the soil.  It was this moment, that the idea of Press-in technology emerged. The SILENT PILER™, which grips onto previously installed piles while using the reaction force to install piles, was born out of witnessing this drawback of driven piles.
After establishing the GIKEN Group, he founded the Japan Press-in Association (JPA) and the International Press-in Association (IPA). He has been the Chairman of the Kochi Prefectural Invention Association and the Kochi Prefectural Industrial Association Chairman. He received the Medal with Purple Ribbon an award given by Japanese government in 2002 and the Order of the Rising Sun with Small Ribbon (for his distinguished invention) in 2011. In 2018 Mr Kitamura was the first Japanese recipient of the Ben C. Gerwick Award (by Deep Foundations Institute). This award recognizes innovative activities in the global marine foundation industry. 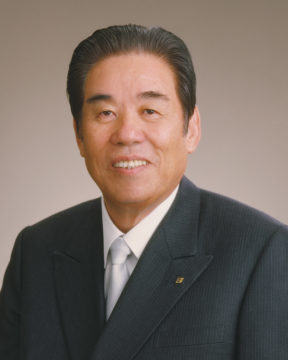 ■ Profile of Moribe Shinnosuke
Born in Tsuno town, Kochi Prefecture. After graduating from Osaka Institute of Technology, Moribe began his career at the Kochi Prefectural Government Office. He held the position of General Manager of the Crisis Management Department until his resignation as he joined Giken in June, 2012. He was appointed Managing Director by November, 2013 and promoted to Executive Director in November of 2015. In June, 2016 he was appointed as Executive Vice President and led the Construction Solutions Department, focusing on promotion of the Press-in Method. As of March 2020, he was appointed President of Giken Europe (Head office: Almere, the Netherlands). 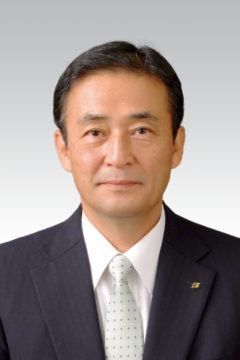